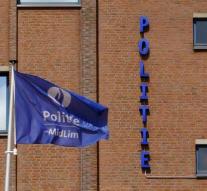 gent - Justice in Belgium accusing a Catholic order of human trafficking. The Augustinian Fathers in Ghent would also indulged in undeclared and forgery.

The monks lead young Africans in their convent, but would put them unpaid work. It is according to the prosecution for at least eighteen people from Benin, Togo and Ivory Coast and one from Vietnam. The number of workers was not indicated, including prospective priests is 27 people.

According to their lawyers, however, refers to 'practices that belong to the tradition of the monastic order. 'The foreign candidates would be familiar with the' practical tasks to be performed in a religious community. '

'This since very long established tradition inherent to the functioning of a congregation, is now apparently defined as human and social fraud,' the lawyers said in a statement. They announce 'vigorous defense' in court.