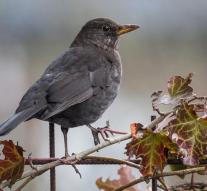 sint - Bird protection Flanders 'hangs the red flag' because of the usutu virus. The organization suspects that there is a new outbreak of the virus that mainly kills blackbirds. It is transmitted by mosquitoes and is in principle not dangerous to humans.

The virus first appeared in the Netherlands and Belgium for the first time on a large scale. In recent weeks, reports of dead or weakened blackbirds have been received at Vogelbescherming Vlaanderen and the Vrijwilligersorganisatie Natuurpunt, they announced on Wednesday.

In the Netherlands, the virus has dived again since last April, but according to Sovon Vogelonderzoek Nederland, there is no alarming situation here. 'We monitor dead blackbirds and are alert to the situation,' said a spokesperson.

The virus originates from Africa. It was probably transferred to migratory birds through Europe, where it arrived in Austria in 2001. Through Germany it reached the east of the Netherlands in August 2016.

An infected blackbird is often easy to recognize. They look unhealthy and weakened and die within two to three days. According to the Flemish nature associations, house mice and owls are also not allowed.