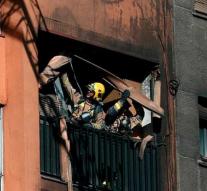 badalona - In a fire in an apartment complex in a city near Barcelona, ​​three people were killed. Three others were seriously injured, including a baby. All injured are urgent...

The fire took place in a house on the sixth floor of the residential complex in the Spanish city of Badalona. Thirteen local residents with long laughs have been checked by the ambulance staff.

According to the Daily Mail, two people were seriously injured after they jumped out of the apartment.

It is not yet clear how the fire started.