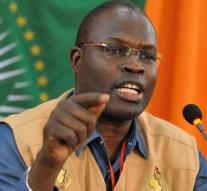 dakar - Opposition leader Khalifa Sall (62) was sentenced to five years in prison by the court in the Senegalese capital Dakar. He was accused, among other things, of misappropriating and forgery, but the court did not consider part of the indictment proven. Two employees of Sall, former mayor of Dakar, received the same punishment.

Sall, no family of the incumbent president Macky Sall, was the main opponent in the presidential election next year. He would have pushed around € 2.5 million in public funds backwards.

According to the charges, the money would have been misappropriated between 2011 and 2015. Sall and his supporters state that the verdict is politically motivated.