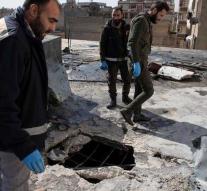 The soldiers were in a tank attacked by YPG fighters. Last month the Turkish forces started a ground and air offensive against Kurdish-Syrian YPG insurgents in Afrin. Ankara sees the YPG fighters as terrorists. They would form an extension of the forbidden PKK movement.

Since the start of the offensive in Afrin, who called the Turkish 'Operation Olive Branch', according to Ankara, a total of seven Turkish soldiers were killed.