Home / World / Five times before a state of emergency in France 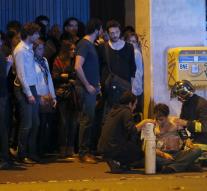 - France, the state of emergency declared after the attacks in Paris. All borders are closed, the army is deployed where needed. It is the sixth time in French history that the government take such a drastic step. An overview of the previous emergency conditions :

- 2005 : A week-long confrontation between youths and the police in the suburbs of Paris and other cities. This happens after the death of two teenagers who were fleeing police hiding in a transformer box.

- 1984 : A separatist rebels in New Caledonia, a French territory east of Australia.

- 1961 : Attempt of generals in the colony Algeria to drop President Charles de Gaulle. Generals were against secret negotiations with the independence movement.