Home / World / Five questions about the nuclear agreement with Iran 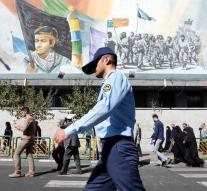 washington - US President Donald Trump is likely to refuse to approve the nuclear agreement with Iran, known as the Joint Comprehensive Plan of Action on Friday. Five questions about the unrest around the nuclear deal.

What is the nuclear agreement with Iran?

Iran promised in 2015 after negotiations with six world powers and the EU to build its own nuclear program. Tehran proved willing to allow inspections and accepted that no large amounts of enriched uranium should have anymore. This had to make the development of nuclear weapons impossible.

In return, economic sanctions against the country were lifted. Also, Tehran should use nuclear technology for peaceful purposes, such as the generation of energy. Several restrictions on nuclear activities expire after fifteen years.

Why does Trump turn against the atomic part?

Trump called it under his predecessor Barack Obama's nuclear agreement earlier 'unilateral' and 'the worst deal ever. 'He promised to' tear up the deal as president candidate 'if he would win the elections.

Nevertheless, President Trump has confidently informed Congress twice twice that the Iranians agree. This 'certify' occurs in the ninety days. The president does not seem to want to give a third time.

Trump complained earlier that Iran does not adhere to the 'spirit' of the agreement. Critics accuse Tehran of destabilizing the Middle East, for example, by supporting Syrian President Bashar al-Assad and Shiite Hizbullah in Lebanon.

What happens if Trump does not approve?

If the president refuses to certify the nuclear agreement, it does not automatically mean that the US withdraws from the agreement. Congress will then have 60 days to decide whether sanctions will be imposed again.

What does the rest of the world want?

Proponents point out that the agreement concerned only the Iranian nuclear program, not on support for extremists or the country's rocket program. The other countries that have signed Trump called on to keep the nuclear agreement. China, Russia, Great Britain, France and Germany recently stressed their support for the deal.

However, the agreement was not undisputed. Thus, at that time, Israel resisted the agreements. Prime Minister Benjamin Netanyahu said that the agreement threatens the survival of his country and increased the risk that Iran is only for the region.

How does Iran respond?

'If Washington decides to withdraw from the deal, Iran has the opportunity to do that as well as other options,' said Iranian Minister Mohammad Javad Zarif (Foreign Affairs) last month. The governor said in another interview to see the certification of the agreement as an 'internal American procedure.' '