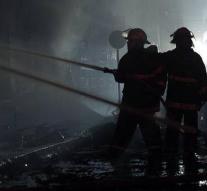 - When a major fire in a famous luxurious shopping area in the Peruvian capital Lima Wednesday five deaths. The fire in mall Larcomar on the rocks on the coast caused thick clouds of smoke that hung among others across the street surrounding the Marriott Hotel.

This is an important place during the upcoming economic summit of countries bordering the Pacific Ocean, the summit of the APEC 19th and 20th of November. US President Obama is staying there for example. The cause of the fire had claimed the police have nothing to do with the summit.