Home / World / Five killed by tornadoes in the southern US 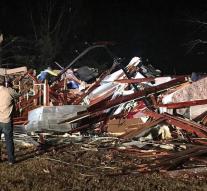 - Tornadoes in the south of the United States have taken on the night of Tuesday to Wednesday at least five lives. Tornadoes kept home in the states of Alabama, Tennessee and Mississippi.

Three residents of the village of Rosalie in Alabama did not survive the storm. A sudden storm in Polk County, Tennessee killed a couple. As a result of the tornadoes dozens of people injured. There was a lot of damage to homes, business premises and the mains.

The US National Weather Service received more than twenty reports of tornadoes inside. Same agency warns on its website that can still create a single tornado on the Gulf Coast and southern Mississippi.