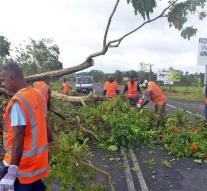 suva - Cyclone Winston has to Fiji five people killed. That the head of the emergency service Sunday told local media.

Winston was a cyclone in the highest category and established a massive havoc. The storm was accompanied by winds of over 300 kilometers per hour. On the island of Koro was almost no single building standing.

It was the worst cyclone that Fiji has ever taken. The government has declared the country a disaster area and imposed a total curfew. The army is deployed to help in the rescue efforts.