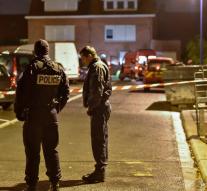 - When a family drama near the northern French city of Lille, five people died. It involves a married couple and three children, French media reported. Among them is a six month old baby.

The bodies were found Wednesday at the home of the family. From a farewell letter that the 42-year-old father is the alleged offender. He first killed his wife of forty, ten year old daughter, son of six months and four years and then committed suicide. He writes that he saw no other way out because of financial problems.

Police suspect that the murders last Friday were committed, since that date on the farewell letter states. The nanny found the bodies in bed. The father had hanged himself in the garage.