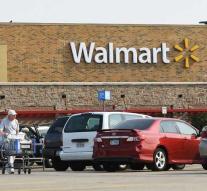 nashville - Five children in the American city of Nashville have been arrested for the murder of a 24-year-old student and lead singer of a local rock band. The arrested are three girls of 12, 14 and...

The children were arrested in the parking lot of a Walmart supermarket, where they were stolen. There was a firearm in the car.

The victim, Kyle Yorlets, was shot dead at his house on Thursday. He could still stumble inside but was found dead by his roommates. According to the police, there was a failed robbery.