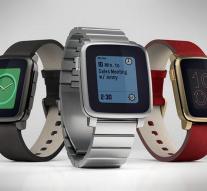 - Fitbit will take smartwatch maker Pebble. The Financial Times citing sources with knowledge of the negotiations. Fitbit, which mainly make fitness bracelets, preys mainly on the expertise of Pebble in the field of smart watches.

Pebble managed to collect a total of more than $ 40 million through crowdfunding platform Kickstarter. The company was a pioneer in the field of smart watches and released in 2012, all of its first smart watch, more than two years before Apple announced a similar product. Although there are many users and developers especially praise the open ecosystem, Pebble knew it difficult to grow into a major market player.

Despite Pebble money managed to get through Kickstarter and another received an injection of 15 million in venture capital, Fitbit reportedly pays a low price for the company, which in recent months financial ran into heavy weather.

Pebble is behind schedule with the delivery of the new Time 2. Pebble said earlier in November to come up with an update on the delivery of the watch. That has still not happened and people that Time 2 supported financially through Kickstarter now begin to ask their money back.