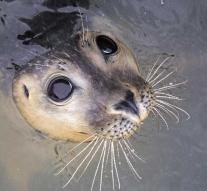 eyemouth - A Scottish fisherman was taken from a rock wall by rescue workers after he had sought refuge there because he was being attacked by a group of about fifty aggressive seals. That is what the Scottish Coast Guard reports on Saturday.