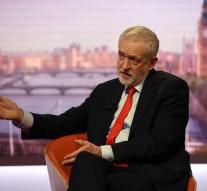 newcastle - The exit polls already seemed favorable to the Social Democratic Labor, and confirmed by the first results coming in. The party won the first two seats, in the northern cities of Newcastle and Sunderland. The victories were expected. The Conservatives also made a profit, but not enough for a win. The populist UKIP suffered severe defeat.

According to the exit polls, Conservatives of Prime Minister Theresa May lose their absolute majority. The party remains bigger than Labor, but the difference is considerably smaller. The Liberal Democrats are also moving forward. If those polls are correct, the British get a so-called hung parliament. Then there will be a minority cabinet or a coalition.

SEE ALSO: Clap for May