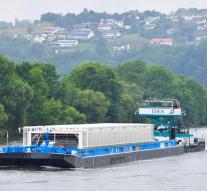 obrigheim - For the first time, the authorities in Germany allow nuclear waste to be transported to temporary storage via the water. On Wednesday, early in the morning, under strict safety measures, a ship was loaded with three containers of radioactive waste at the stationed Obrigheim station.

The ship will make a 50km journey across the Neckar towards Neckarwestheim where the waste will be in temporary storage.

Opponents had announced demonstrations and soon heard of themselves. Four activists put themselves in Bad Wimpfen with a large banner of a bridge, which meant that the transport had to be stopped. The police sent special units to the shore connection to remove the activists.

The police accompanies the transport by boat, a helicopter and staff on shore. The trip is expected to take twelve hours but will now expire.

According to energy company EnBW, water transport is a safe way. The company will transport three containers five times in the next few weeks.