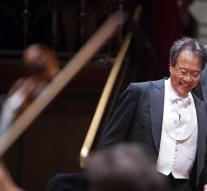 kabul - In Afghanistan represents the first female conductor on the podium. This is according to the BBC for the 17-year-old Negin Khpolwak, who comes from a poor family in the conservative province of Kunar.

Khpalwak still studying at the only music school in the country, but has already made ​​her appearance as a conductor. Not everyone was happy with their choices. " My uncle told us, girls from our family should not learn music. It is against tradition ", Khpolwak told the British broadcaster.

Under pressure from her family, the study had to be stopped for months. Finally grabbed the father of the teenager : she was allowed back to school. According to the director of the institution it often happens that family members or elders exert pressure on families to bring young people from the training.

Moreover, the study is not without danger. Some Afghans consider the most music as sinful. So last year came a bystander were killed when a suicide bomber blew himself up during a performance of the students.