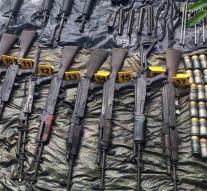 bogota - The first twelve warriors of the FARC guerrilla movement have officially returned to Colombian society. They got Friday at a ceremony in the Colombian capital of Bogota certificates from the United Nations confirming that they had deposited the weapons.

Around the 6800 rebels of FARC are located in special zones where they are demilitarized. They wait there when they can return to society. About six hundred UN employees oversee this process. 'Friday's ceremony marks the beginning of an ongoing process in which FARC fighters make the transition to civil society after the laying down of their weapons', according to the UN statement.

The FARC and Colombia concluded an agreement last year that ended 52 years of war. This resulted in an estimated 220,000 people.