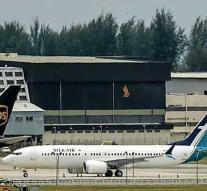 amsterdam (dft) - British aviation authorities refuse to allow or take off Boeing 737 MAX aircraft on Tuesday afternoon. The United Kingdom is thus the first EU country to imitate other...

Earlier this week, Boeing announced a software update in response to concerns about possible problems in other devices of this type.

The Boeing company is suffering a substantial loss on the stock market due to the crash. Today, the share is also falling on opening