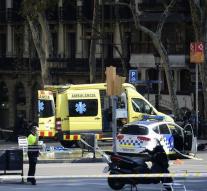 barcelona - The situation of the three Dutch victims of the Barcelona attack is slowly moving forward. One of them has been fired today from the hospital, the other two hope to return to the Netherlands for further treatment this weekend. That allows the spokesman of the two affected families to know.

The male victim was least affected by the three. He was flooded on Thursday by fleeting pedestrians. 'His condition was so good now that the doctors in Spain have decided to dismiss him from the hospital,' says the spokesman. The two female victims are worse off. They were both hit by the terrorist bus that caused death on Thursday during a murder trial on the Ramblas. 'Their state is unchanged. They feel a little bit better every day. '

The victims were together on holiday in Spain. It is a family from Dedemsvaart and a 16-year-old traveling girl from Ommen. Bertha, the mother of the family and Karlijn, her daughter's girlfriend, have severe bone fractures and remnants. They have now been operated. According to the spokesperson for the family, recovery is now the right way. 'The pain medication is slowly reduced. 'The family has good hopes that this weekend can be brought to a Dutch hospital. 'However, this is a decision taken by doctors in Spain and the Netherlands and the insurance companies responsible for repatriation. '