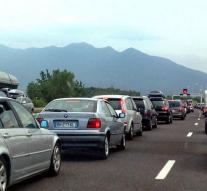 - Next weekend will be on French roads for the first time this summer because of busy holiday traffic. Reported that the Traffic Information Service (VID), who expects at least 600 kilometers of traffic jam.

,, The French traffic service issued red code for Saturday. This is the first time this season. '' The VID expected to peak at lunchtime in particular for the roads to the south. Mainly the Autoroute du Soleil, or the A7 between Lyon and Orange, will be heavily burdened by vacationers.

Black Saturdays in France fall this year on July 30th and August 6th. In the Netherlands this week begins at the end of the region amid the summer holidays.