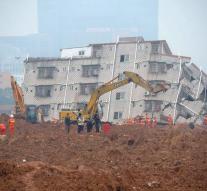 shenzen - Rescuers on Tuesday for the first time found a body in the rubble in the southern Chinese city of Shenzhen. Sunday there were dozens of buildings destroyed by a landslide. Certainly 81 people are still missing, according to state media.

The search for survivors, according to the Chinese Ministry of Defence a race against time . With drones and excavators is wanted in the vast layer of mud and waste, which covers an area the authorities of 380. 000 square meters. Meanwhile, a number of people would be rescued from stricken buildings.

The landslide caused enormous damage in an industrial complex. On images to see how buildings collapsed under the mudslide. The mud would have been derived from an overflowing landfill, which already should have been closed by the authorities in February.