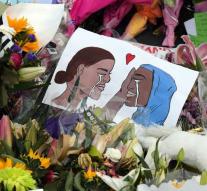 christchurch - The authorities in Christchurch have released six bodies from victims of the attacks on mosques in the News Zealand city. Fifty people died as a result of the violence.