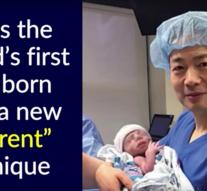 amsterdam - A Jordanian boy is the first child in the world to have three biological parents. In addition to a biological mother and father also have DNA from a donor.

Two eggs to mix with each other, women with a genetic disorder that would like to have children anyway birth to a healthy baby. The gene responsible for the hereditary disorder, is removed and replaced with the nucleus of a healthy oocyte. The fertilized egg then consists for 0.1 percent of genetic material from the donor.

Jordan's parents were treated by an American team in Mexico.