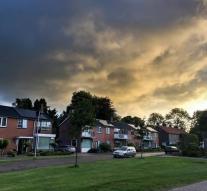 - It's stormy weather, but Wednesday it's even harder. It rains in many places and in the west there is a strong strong wind with 75 km per hour winds.

In large parts of North Holland there is a chance of heavy windshoots of 75-85 km per hour. On the north-west coast, some wind power is expected to wind up to 100 km per hour. The morning rush will be more busy in many places.

Especially on the Afsluitdijk and the dike between Lelystad and Enkhuizen, road traffic catches a lot of wind.

On Monday it is already a lot of turbulence with a fairly powerful wind in the interior. In the coastal areas the wind is powerful to hard with a chance of heavy windshit of 75-80 km per hour. North-westerly breezes and Monday afternoon we can expect bushes in the interior. There is a chance of a thunderstorm. In between there are also sunny periods.

SEE ALSO: KNMI: in the west a lot of rain and wind threats

On Tuesday it is temporarily less turbulent, but there are expected showers. Combined with today's precipitation, a total of 50 mm precipitation can fall in the west and northwest, and the code is yellow.

On Wednesday we will be able to make the first autumn storm. From the early morning on the west coast there is a stormy southwest wind with heavy winds of 75-85 km per hour. In the northwestern coastal area, the wind can temporarily reach storm power (9 Bft.) And then the winds can reach a speed of 90-100 km per hour.

The morning hatch is expected to fall a lot higher. In the Randstad, it is less windy than on the North Holland coast, but in South Holland it is turbulent with a strong to strong southwest wind and (heavy) gusts of 70-80 km per hour. There are also rainfall in many places. Also on the Afsluitdijk and on the dike between Lelystad and Enkhuizen it is stormy.

In addition to traffic pressure, nuisance can also be caused by fallen trees. Many trees are still full of leaves and catch extra wind. In the afternoon it stays wet and windy, but the strongest wind field slowly moves towards Denmark. The temperature continues to rise at 16-17 degrees.

The last time it stormed in the Netherlands was only three months ago when a rare summer storm hit the country on June 6th.