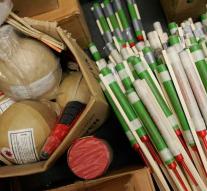 brussels - New Year's fireworks in Brussels this year by the terrorist threat. The mayor of Brussels has decided that, as Belgian media report.


The annual festival has been canceled at the Brouckèreplein after raids on Monday two suspects were arrested. With them was military clothing were found and confiscated. Possibly the garments were part of a terrorist attack.
The police across Europe sharply during the New Year.
NEW