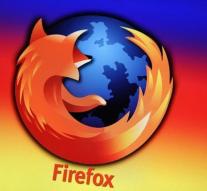 - Firefox is the browser that users according to the most reliable. According to a survey done by the digital security firm Sophos .

Chrome follows with 21 percent, 16 percent scored Opera, Safari, Internet Explorer 9 percent and 3 percent. The Tor Browser, which has privacy and security are of paramount importance, appears not to be as well known and scored 6 percent. According to Sophos, it is striking that the number of Chrome users has risen, while Firefox just drops. Despite this, most people identify as the most reliable Firefox browser.