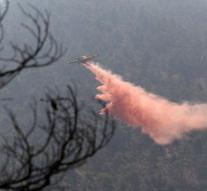 - Two firefighters were Tuesday killed and a third seriously injured in extinguishing one of the largest forest fires in Cyprus in years.

The fire had broken out Sunday in the foothills of the Troodos Mountains on the island in the eastern Mediterranean. Strong winds and high temperatures fueled the flames further on, hampering firefighters during firefighting. They have the support of tanker aircraft from Greece and Israel and helicopters of the British military base in Cyprus.

The two firemen were slain when they came under a water tanker which overturned. A third firefighter is in critical condition after a fire truck plunged into a ravine. They are the first fatalities in the fire service in Cyprus in ten years.


A spokesman for the fire department said the fire is still not under control.