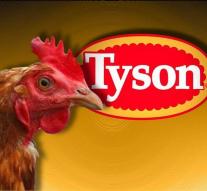 - The US meat producer Tyson Foods has fired ten employees after a video had surfaced which showed how chickens were mistreated. The poultry was kicked, beaten and thrown through the air.

The activist group Compassion Over Killing put the images on the Internet. The movie was shown include how an employee Tyson the head of a live chicken crushed beneath his boot.

,, Tyson should be held responsible for the horrific treatment of these animals, '' said the head of the animal protection organization. Tyson announced,, too disgusted by the actions of the individuals from the video. '


The company promised employees who work with poultry to better training in dealing with the animals. The organization breeds still other measures.

Both the meat business as the activists have contacted the authorities. Which must decide whether the employees concerned are also prosecuted.