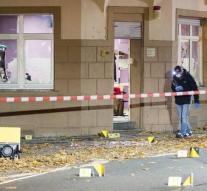 essen - Police in Germany have arrested two men suspected of having thrown a petrol bomb at a Turkish cafe it. That made the police Saturday known that speaks of two men 19 and 23 years old.

The incident happened Friday night in Essen, close to the border near Venlo. The suspects would be at least one fire bomb at the pub have thrown inside. Someone inside was slightly injured when he tried to extinguish the fire.

The suspects are accused of arson and attempted homicide. It is not yet clear what the motive of the suspects, though police rule out that it is for political reasons.