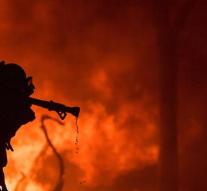 san francisco - Quickly catching natural fires in northern California cause many residents to flee. The fires threaten, among other things, the well-known wine regions around Napa and Sonoma Vally. Hundreds of firemen are in a row to prevent thousands of homes from entering flames. The governor of the state, Jerry Brown, declared the state of emergency on Monday.

Due to the harsh wind in the night from Sunday to Monday, the situation has deteriorated rapidly. According to the fire brigade, more than 80 square kilometers have been placed near the city of Santa Rosa. Local media reported that several buildings were burned in the area. In many districts, schools and government offices remained closed.

Unusually high temperatures and severe drought have increased the risk of fire in many parts of the west of the US in recent months.