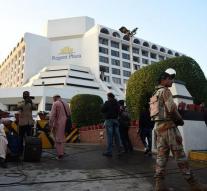 - When a major fire on Monday at least eleven people died in a hotel in the Pakistani city of Karachi. Dozens of people were injured, local media report.

The fire started on the sixth floor and was under control after four hours, late mayor Waseem Akhtar know. Among the dead were four women and seven men.

Rescuers managed using a crane sure to save hundreds of people from the burning hotel. According to the local hospital about seventy people being treated for smoke inhalation, thirty of whom are in critical condition.