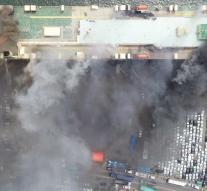 seoul - Due to a fire in a cargo ship about 1500 cars went up in flames in the South Korean port city of Incheon. The fire brigade needed three days to extinguish the fire, the South Korean news agency Yonhap reported.

The vessel had a total of 2438 used cars on board when this week broke out. The 31 crew members of the Auto Banner remained unharmed. They could flee or have been saved. The fire brigade used some 840 men and 240 vehicles to get the fire under control.

Research must show what causes the fire. Fire brigade officials say that an engine on one of the cars on board may have become overheated.