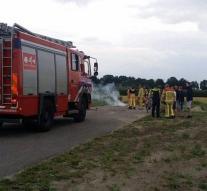 gemert - The fire brigade went out for a fire at the Leije in Brabant Gemert on Tuesday evening. On the spot, some youngsters were burned schoolbooks.

A resident saw a fire in the distance after which she called the fire department. The police were also on the spot and addressed the students and recorded their data.