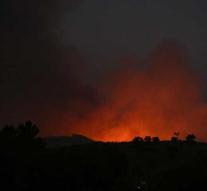 lisbon - In the heat-affected Portugal, dozens of fires are burning. One of the largest fires rages in mountainous areas near Monchique on the north side of the Algarve, which is popular with tourists.

The Lusa news agency reported that seven hundred firefighters and two hundred fire engines and an unknown number of helicopters were deployed at Monchique alone. Due to the strong wind and the high temperatures, the extinguishing work is difficult.

In large parts of Portugal and Spain the temperatures rise above 40 degrees this weekend. According to the Portuguese newspaper Publico about thirty fires spread throughout Portugal. To combat this, 1600 firefighters, an unknown number of fire engines and around twenty firefighting aircraft were deployed.

In the summer of 2017, 64 people were killed in forest fires in Portugal. To help prevent victims, the civil protection service now sends messages to mobile phones. Publico reported that only Saturday seven million people have received a message in which they were warned about forest fires or the risks involved.