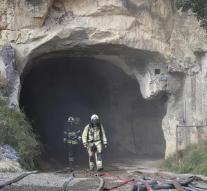 maastricht - The fire brigade finally stops attempts to extinguish the fire in the caves at Maastricht. 'We let the fire be burned out,' said a spokesman for the fire department.

That can take a long time, warns the spokesman. 'People should take into account smoke or stench over one or two weeks,' he said.

The decision reached after consultation with specialists that further extinguishing attempts were too dangerous. 'We can not send people in,' said the spokesman.

The fire brigade had already stopped for safety reasons early in the morning because of the extinguishing of the big hay in the caves at Maastricht. Due to the nebulized extinguishing water the temperatures became too high and the masonry dumped down again, on which the fire brigade retreated.

Plans to use a wind turbine to expel smoke and hot mist are reported. As a result, vibrations would occur which would increase the risk of collapse.

The fire department warns hikers not to enter the caves at Kanne and Château Neercanne in the coming weeks. There is a lot of smoke and carbon monoxide and there is a risk of collapse. 'On Friday, a plate of 500 kilos of marl came down,' he said. 'Due to the heat, the marl dries out, shrinks and falls down. 'Also, walls deposit in.

Although there is a deposit around the entrance of the caves. 'But such deprivation does not scare everyone,' said the spokesman. 'Hence this urgent call not to enter the caves. '

By turning the wind, Maastricht appears to be even free from the smoke, which now draws to Belgium.

The fire broke out on Thursday evening in 800 kubus hay in the caves at Kanne. Smoke, soot and pitch have caused great damage in Castle Neercanne, which includes the underground catering industry.