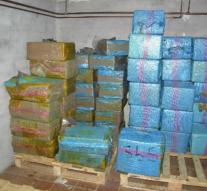 helsinki - The former boss of the narcotics brigade of the Finnish city of Helsinki received Thursday a decade in prison for drugs smuggled into the country. The Finnish court sentenced him for the importation of approximately 900 kilos of hashish from the Netherlands.

According to the court in Helsinki Jari Aarnio abused his position and undermined confidence in the police. These cases are rare in Finland, one of the countries with the least corruption in the public sector in the world.

Aarnio who was arrested in 20143, denies the allegations.