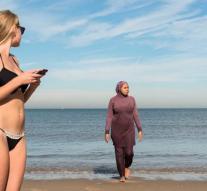 - Of the 31 French municipalities that have banned the wearing of a BURQINI, have let distribute only four tickets. In total this summer, 32 fines were issued for the wearing of religiously motivated clothing, the newspaper Le Monde reported Friday.

The vast majority of vouchers (24) were written in Nice, where earlier this week photos were taken by a woman who was forced to take off her tunic apparently on the beach by armed officers.

The newspaper did hear from several beach resorts where women BURQINI was asked to leave the beach.