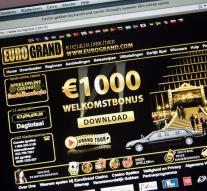 the hague - Foreign gambling sites have free play in the Netherlands. They can punish all rules without penalty because the fines do not prove to be indemnified. It's even so bad that no cents have been received since 2014.

This is evidenced by figures from the Chancellor Authority (KSA). From early 2015 until April of this year, no less than 750,000 euros were sent to penalties for foreign sites. They do not seem to be impressed, because no one has paid the bill over the entire period.

The Chancellor Authority (KSA) received the last foreign currency in 2014. But that was still only a small part of what was written off on that year. The Netherlands then received 380. 000 euros, while 690,000 could have gone to the treasury.

The KSA allows the financial penalties to be difficult to collect. The watchdog usually imposes a fine if a gambling site focuses on Dutch players. Online gambling is illegal here, though there have been laws in the process of changing that for years.

Goksites not written in Dutch, no '. En 'and do not advertise to the Netherlands, jump the dance. Their prosecution is not a priority, it's called, and so they are actually tolerated. It may even be that they eventually get a license when online gambling is legalized.

Gamblers themselves usually do not fear anything when they play online on foreign sites. Only if they win large amounts of money, which the tax office asks about, they are the mess.

Responsible Secretary of State Klaas Dijkhoff (Security and Justice) previously stated that there are problems with the collection of foreign fines. This is because of the administrative fines and which generally do not have legal status in foreign countries.

Dijkhoff is now investigating how this can be done.

Read more? They have guessed and lost everything... (Premium)