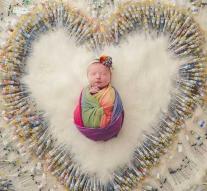 amsterdam - It was an endless quest that always led to disappointment, pain, despair, anger and death. But now daughter 'London' is there.

Patricia and Kimberly O'Neill wanted to show how difficult the road to their newborn baby has been. They used a total of 1616 injection needles for IVF treatment. The couple had miscarriage three times.

They decided to have a special photo taken, in which the baby is surrounded by dozens of hypodermic needles. The image goes viral. The pain has turned into something beautiful: many social media users see the photo as a symbol of hope.

Photographer Samantha Packer was perplexed when she met the young and now very happy parents. 'They had asked if they were allowed to take needles', she tells the NOS. 'But the couple came up with two boxes full of hypodermic needles!'

For four years the parents tried to get a child, via ivf. The miscarriages chopped in, but the parents did not give up. Three weeks ago daughter London saw the light of day. The rainbow colors in the photo are a tribute to her deceased brothers and sisters.

Users recognize the story of Patricia. 'I get eight jars a day myself. We also plan to keep them ', someone writes. 'This photo shows so much beauty and strength. '