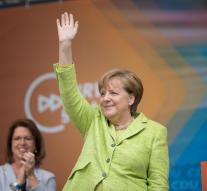 dusseldorf - The Christian Democratic Party of German Chancellor Angela Merkel, CDU, won the elections with 33 percent of the votes in the state of North Rhine-Westphalia (NRW) on Sunday. This is evidenced by the preliminary finalization announced on Monday morning.

The SPD is 31.2 percent. The German Democratic Socialist, Hannelore Kraft, had announced Sunday to step up because of the disappointing result when the exit polls predicted a defeat for her party.

The liberal FDP reached 12.6 percent of the votes followed by the right-radical Alternative für Deutschland with 7.4 and the Greens by 6.4 percent.