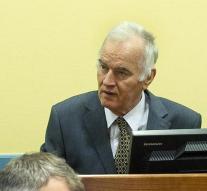 - More than twenty years after the war in Bosnia and Herzegovina (1992-1995) and 4.5 years after the start of the criminal proceedings to an end gradually comes to the case against the former commander of the Bosnian Serb forces, General Ratko Mladic. Monday start of the ICTY prosecutors with their closing argument against the man 'the butcher of Srebrenica 'and is called the' Serb Napoleon.

Supporters of Mladic are from 9 to December 13 next. The website of the Hague-based UN tribunal provides the decision in November 2017.

The now 73-year-old Mladic is seen as responsible for the massacres around the eastern Bosnian city of Srebrenica in 1995. That cost more than 7,000 Muslim boys and men living. The approximately six hundred Dutch peacekeepers in and around the enclave which was proclaimed as a safe haven for Muslims by the United Nations, July 11, 1995 were overrun by Mladic's troops who had surrounded the enclave.

Mladic is accused as a commander to be responsible for the execution of the able-bodied Muslim men after the capture of the enclave. It would be forces and some militias have been across the border in Serbia, that the carnage on their conscience. Especially ICTY Western-backed labeled the massacre in 2004, even as a case of genocide.

Mladic is except for crimes against humanity and war crimes, also accused of genocide. Except for the massacres of Srebrenica Mladic is also held responsible among others for a campaign to shoot targeting civilians in besieged Sarajevo. The city was besieged by Bosnian Serbs.

Mladic could stay long in the hands of the tribunal fourteen years thanks to his connections with the former Yugoslav military and later with relatives in northern Serbia. When he finally end in May 2011 was detected in a farm, pale as a recluse living a general wreck, hit by strokes. He was brought back on his feet for the process.