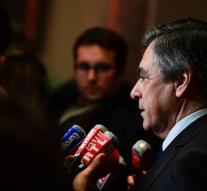 berlin - French presidential candidate Francois Fillon finds the sanctions of the European Union useless against Russia. The candidate of the center-right party Les Républicains said Monday after a meeting in Berlin with German Chancellor Angela Merkel.

Fillon warned that Russia and the United States under the new president Donald Trump could forge ties and that could come to be the EU than offside. According to Fillon economic sanctions from Brussels have no effect and the EU must ensure they remain with Moscow talks. Fillon also believes that Russia should make a 'gesture' before we can seriously talk about lifting the sanctions.

The United States and the European Union proposed in 2014 sanctions against Russia for its annexation of Crimea and Moscow's support for separatists in eastern Ukraine. According to Fillon does both Russia and Ukraine too little to get the peace process back on track.