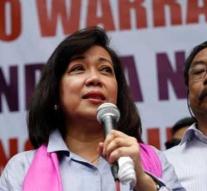 manila - The Philippine Supreme Court has decided to remove its own chairman from office. Judge Maria Lourdes Sereno had repeatedly criticized the government of President Rodrigo Duterte. He named Sereno his 'enemy' last month.

The colleagues of the chief judge decided to withdraw her appointment with eight to six votes. There would have been irregularities surrounding her appointment. Sereno denies that and wants to challenge the decision. She called on her supporters to 'defend the constitution'.

Judge Sereno had criticized, among other things, the bloody war against drugs of the government. The opposition reacted disappointed to her deposition. Senator Risa Hontiveros spoke about a 'dagger blast in the heart of our constitution'. Her party said in a statement that the Supreme Court has now become a 'court of puppets'.