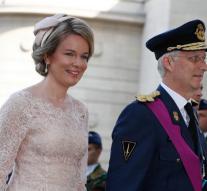 brussels - The Belgian royal couple Philippe and Mathilde Thursday under very heavy security kicked off the National Day in Brussels with the traditional Te Deum in the St. Michael and Gudula Cathedral in Brussels. Their four children were with.

Because of the threat of terrorism and in view of the attack in Nice last week during the French national holiday, the safety measures were huge. There were snipers on the rooftops around the cathedral and surrounding area was completely closed to traffic. All guests were checked when entering the church.

Outside were five hundred spectators, a thousand less than last year. They saw, among others, Prime Minister Charles Michel, several ministers, chairman of the European Commission Jean-Claude Juncker and President of the Muslim Executive, Salah Echallaoui, come and go.


It was the first time that Jozef De Kesel, the led the celebration in December installed Archbishop of Malines-Brussels.