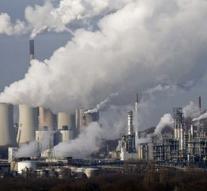 - Have for the start of the UN climate conference in Paris all 183 countries submitted their national climate plans. That is a fundamental step forward, said UN climate chief Christiana Figueres Saturday in Le Bourget near Paris.

The French Foreign Minister Laurent Fabius called the " one of the first elements of success ". Figueres, however, reiterated previous objectives of countries greenhouse gas emissions limit insufficient to keep global warming below two degrees Celsius. Therefore must be made ​​in the coming summit agreements that increase these efforts, she said.

From Monday to negotiate in Le Bourget representatives from 195 countries, an agreement on climate protection. Figueres said that for the kickoff of the top even more national climate plans are to be expected.