Home / World / File past with smart bus from China 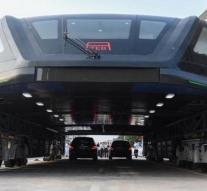 - Passenger Transit Elevated Bus traffic jams past. The vehicle, which is a mix of a huge bus, tram and monorail rides on the highway over other traffic around. The bus made its first test run Tuesday in the Chinese city of Qinhuangdao.

It reports the Chinese news agency Xinhua News. To give an idea of ​​the enormity of the vehicle: the bus is 22 meters long and 7.8 meters wide. The colossus is 4.8 meters high and there may be 300 people on board. The Superbus rides on a kind of track along the way.

Coach designer, the Chinese Song Youzhou, is working on several prototypes. Five Chinese cities have now signed up for pilot projects. Where the bus will not be allowed trucks.