Home / World / File Colombia runs off the end of October ' 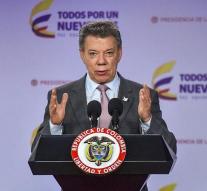 bogota - Colombian President Juan Manuel Santos has warned that the country ' has entered a gray zone '' and that the cease-fire with the FARC expires at the end of this month. Santos consults Wednesday with his predecessor and political rival Alvaro Uribe on how to proceed with the peace process nan Sunday's referendum. Uribe was the driving force behind the rejection in a referendum of the peace agreement Santos had reached with the FARC.

Uribe was president from 2002 to 2010. He continued with great success in a military victory over the once Marxist rebel movement. Uribe thinned the ranks of the FARC drastically out. Santos then wanted to finally bring peace to his country by the FARC negotiated to lay down their arms.