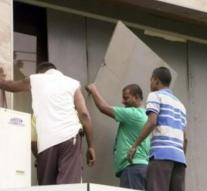 suva - The Government of Fiji on Saturday imposed a curfew because of the approaching cyclone Winston. The storm threatens to be the worst ever to hit the island nation.

The neighboring island nation of Tonga last week was twice beaten by Winston. The cyclone has since gained momentum again and is heading now in Suva, capital of Fiji. The storm accompanied by winds of 230 kilometers per hour and gusts up to 325 kilometers per hour.

The curfew is from 18. 00 am local time in force. The authorities have set up 758 evacuation centers for the 900 000 inhabitants of the country. Prime Minister Frank Bainimarama has called on the people to prepare for a,, terrible event '.,, We can not afford to be laconic, '' said the prime minister.,, I make it particularly worried that people in urban areas do not seem to take seriously the warnings about the seriousness of the threat. ''