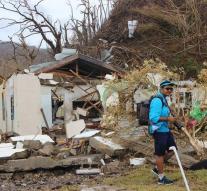 sydney - Authorities in Fiji have again revised upwards the death toll from cyclone Winston. The counter is now at least 42. Meanwhile, the supply of much-needed relief comes slowly.

Since the cyclone struck the island nation Saturday, the death toll is rising daily. Contact with many islands were days not possible, but starting slowly to get going.

A team from the ICRC reached Tuesday by ship to the island of Koro, which was hardest hit. A number of islands it is still unclear whether relief can still be delivered by ship, or that all scaffolds are wiped out. Australia and New Zealand have helicopters ready to provide these islands by air.

Thousands of people are still in shelters. Winston was the worst cyclone that Fiji has ever taken.